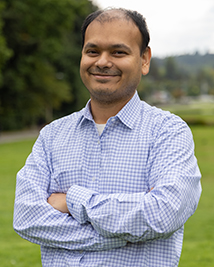 Prof. Arka Majumdar is an Assistant Professor in the departments of Electrical and Computer Engineering and Physics at the University of Washington, Seattle. He received his B. Tech. degree from the Indian Institute of Technology, Kharagpur in 2007, where he was honored with the President’s Gold Medal. Majumdar completed his master’s degree (2009) and Ph.D. (2012) in Electrical Engineering at Stanford University. He spent one year at the University of California, Berkeley (2012-13) and also at Intel Labs as a postdoc in Santa Clara, CA (2013-14). His research interests include developing a hybrid integrated nanophotonic platform using emerging material systems for applications in ultra-low power optical information science, imaging, and microscopy. Majumdar is the recipient of the Young Investigator Award from the Air Force Office of Scientific Research (2015), Intel early career faculty award (2015), Alfred P. Sloan research fellowship for physics (2018), and NSF CAREER Award (2019).