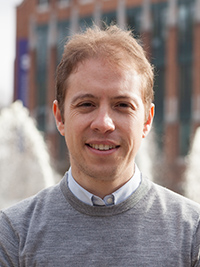 Brian Johnson joined UW’s Electrical & Computer Engineering Department in 2018 as an assistant professor. He received his M.S. and Ph.D. degrees in electrical and computer engineering from the University of Illinois at Urbana-Champaign in 2010 and 2013, respectively, and was awarded a National Science Foundation Graduate Research Fellowship in 2010. He has five years of prior experience as a staff scientist at the National Renewable Energy Laboratory where he led a variety of projects centered on the development of next-generation controllers and energy conversion circuits for power systems. He currently serves as an associate editor for the IEEE Transactions on Energy Conversion.